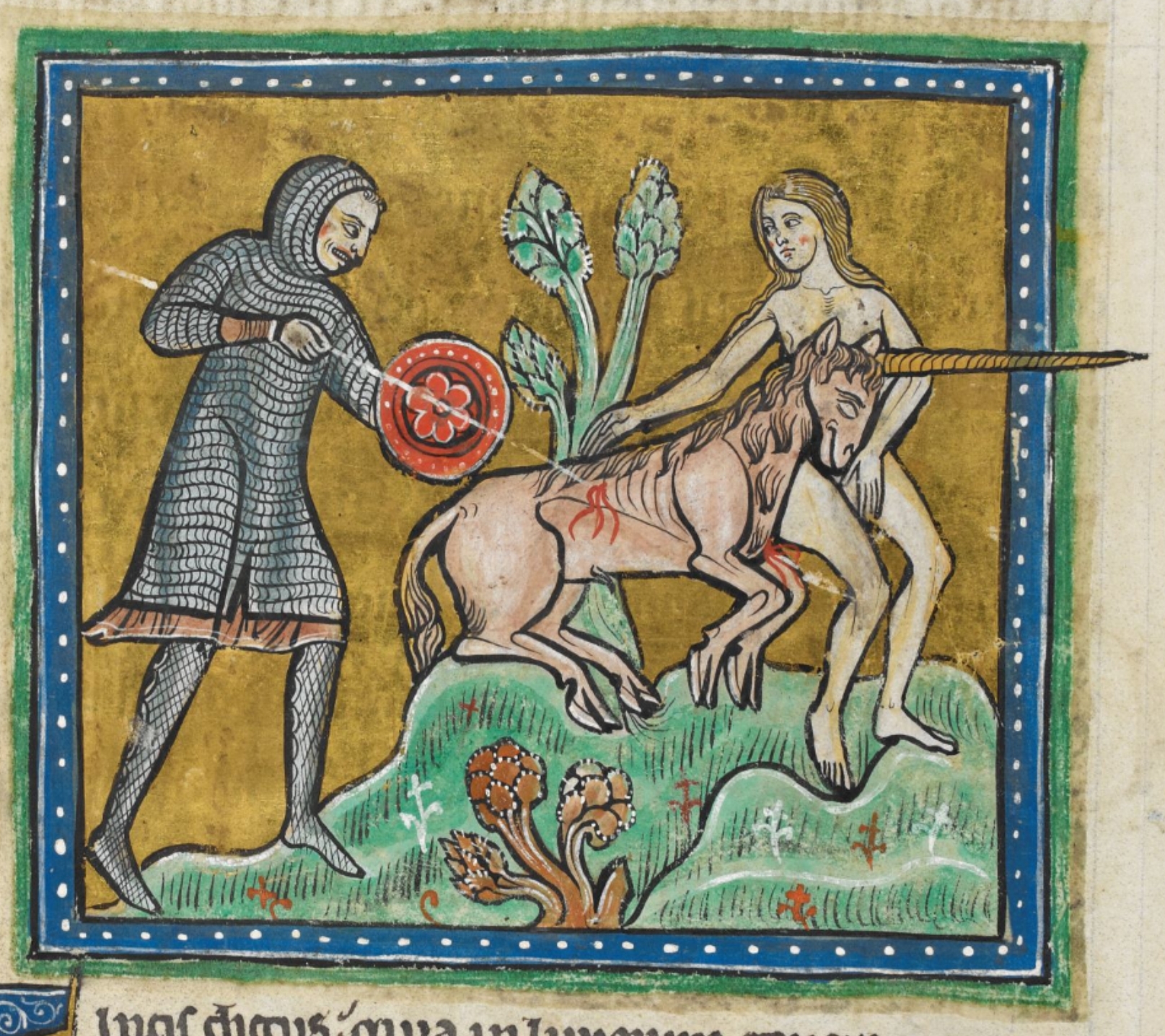 The account of the unicorn is often combined with that of the monocerus, with some sources saying that they are the same animal. Other sources treat the two as separate beasts, and describe them quite differently. Some manuscripts have accounts and illustrations of both.

The unicorn is described variously as resembling a small goat, an ass, or a horse. It has a single horn in the middle of its head; the horn is usually depicted as straight and long, and often with a spiral groove running up it. The unicorn is fierce, strong and swift, and no hunter can catch it. To tame the beast so it can be captured, a virgin girl is placed in its path. The unicorn, seeing the maiden, comes to her and puts its head in her lap and falls asleep. The hunters can then easily capture or kill it. Some accounts say the girl must bare her breast and allow the unicorn to suckle. If the unicorn is captured, it is taken to the king's palace.

The unicorn is the enemy of the elephant, which it attacks with its horn, piercing the elephant's belly. Some sources say that it is the sharp nail on the unicorn's foot that pierces the elephant.

A unicorn's horn is highly valued. It can be used to detect poison, and if dipped in a poisoned drink, the horn causes the poison to be rendered harmless. Powdered unicorn horn is used as an aphrodisiac.

In Christian allegory the unicorn signifies Christ, who was made incarnate in Mary's womb, was captured by the Jews, and was put to death. The unicorn's fierce wildness shows the inability of hell to hold Christ. The single horn represents the unity of God and Christ. The small size of the unicorn is a symbol of Christ's humility in becoming human.

From a non-Christian viewpoint, the unicorn's horn can be seen as a phallic symbol, with which it will "defile" the maiden. The hunters kill the unicorn to protect the maiden's purity, though the maiden may not want to be protected; most images are ambiguous as to the maiden's intent in attracting the unicorn and she often seems to protest its killing.

The unicorn is usually depicted with a maiden, who often holds the unicorn's horn in one hand while raising the other hand in seeming protest at its killing. The unicorn is often shown with its head in the maiden's lap. One or more hunters (or soldiers) are usually shown stabbing the unicorn with a spear or a sword. In some images the maiden's facial expression shows horror or regret, perhaps indicating she had not wanted the unicorn killed.

"Unicorn horns" were known to medieval people, but the long spiral ivory horns they saw were actually the long tooth of the male narwhal, a small whale found mostly in the arctic. These could have been caught (or found dead) by Norse hunters in the Baltic Sea or the ocean around Norway, and the "horn" traded in Europe as unicorn horn, either whole or in pieces. Narwhal tusks look exactly like the traditional description of the unicorn's horn.